Beautiful Marblehead Lighthouse on Ohio’s Lake Erie Shore is a destination you will want to return to again and again. Keep reading to learn why you need to add this Ohio State Park to your must-visit list.

Marblehead Lighthouse has to be one of my favorite places to visit in Ohio.  We have travelled to Marblehead Lighthouse many times over the years. I never fail to be in awe of this impressive structure that has stood watch over Lake Erie for nearly 200 years, guiding ships to safe passage.

It is no wonder that the beautiful lighthouse is the most photographed site in the whole state of Ohio.  The view from the top of the tower gives you a perspective of just how massive Lake Erie is – something you never quite grasp from just looking out at the water from the shore.

We had visited the lighthouse many times during the off season before we ever had the chance to take the tour to the top.  Even if you are there during the off-season, the light at Marblehead is still worth visiting.  It’s a beautiful spot for a picnic if the weather is warm and it is always fun to sit along the rocky shore and watch boats out on Lake Erie. If you look closely at the rocks along the shoreline, you can see evidence of the glaciers that moved through the area and formed the Great Lakes.

An added bonus of visiting during the off-season is that you are more likely to be able to get photos of the lighthouse without a bunch of tourists standing around it.

If you are lucky enough to visit when the lighthouse is open for tours, you will have the chance the climb the 77 steps to the top for a nominal fee.  As a reward for your effort, you will be treated to a gorgeous view of Lake Erie.

I didn’t have any problem climbing to the top of Marblehead Lighthouse.  For me the issue was coming back down.   I have a bit of a fear of heights, so it was a bit unnerving that you could see through the steps on the descent.  The view from the top was amazing and worth the climb, but I have to admit I was very glad to get back down to ground level.

Tours of the lighthouse are given daily (currently noon to 4 pm) during the summer months on a first come – first serve basis.  It was $3 a person to climb to the top when we were there.  The guide was knowledgeable and happy to answer any questions you might have.

It can be a bit confusing, but there are actually two keeper’s houses in Marblehead, OH.

There is an on-site keeper’s house right next to the lighthouse which is maintained by the Marblehead Lighthouse Historical Society.

The Marblehead Lighthouse State Park keeper’s house serves as a museum with several historical displays, including the Fresnel Lens that was used at the lighthouse until 1969.  There is also a small gift shop inside.

You can also tour the home of the first Marblehead Lighthouse keeper Benejah Wolcott.  Although he stayed on-site during navigation season, he also maintained a private residence.  Wolcott’s private resident is also known as the Keeper’s House and is located 2 miles away from the lighthouse  at 9999 Bayshore Rd in Lakeside Marblehead.

Marblehead Lighthouse State Park has changed a bit from our first visit some 20 years ago.  In 2016, a Lifesaving Station Museum was constructed on the grounds.  The building is a replica of an 1876 US Lifesaving Station.

The museum is full of exhibits detailing the history of the US Lifesaving Service and it’s evolution into the US Coast Guard.  It includes a restored Coast Guard rescue boat and the launching railway.

Marblehead Lighthouse state park is a great place for a picnic with gorgeous views of Lake Erie and the waves crashing against the rocks.  There are several picnic tables scattered throughout the grounds and we’ve never had a problem snagging one.

Get Directions to Marblehead Lighthouse:

The museums are open and tours of the lighthouse are offered noon to 4 pm daily from Memorial Day to Labor Day.  The grounds are open year-round during daylight hours.

There are several places to camp near Marblehead Lighthouse OH…

Our preference would be any of the state parks campgrounds because the campsites tend to be larger, but the KOA was perfectly fine too.  The above picture of our teardrop was taken at the Sandusky KOA.  The campsites were a little crowded and there were a little too few trees for our liking.  However, it was perfectly fine for a long weekend camping trip when the majority of our time was spent sight-seeing.

The campground on Kelley’s Island was our favorite, but obviously that entails the expense of transporting your camper on the ferry.  Maumee Bay State Park outside of Toledo, OH is another option, but it is about an hour away so I didn’t include it on the list.  It’s a beautiful campground though and also on the shore of Lake Erie.

Other things to see near Marblehead Lighthouse in Ohio

And if you enjoy quirky roadside attractions as much as I do, you will want to make sure to check these out…

The gift shop at the Marblehead Lighthouse keeper’s house has a small assortment of post cards and lighthouse related gifts.

If you collect smashed pennies, there is penny machine in the museum which makes several designs of Marblehead Lighthouse pressed pennies.

If you collect lighthouse passport stamps, be sure to ask the gift shop cashier to let you stamp your book. 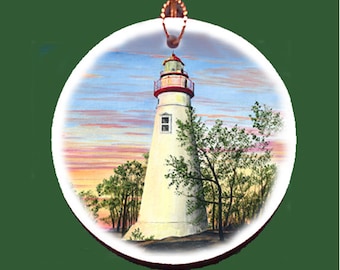 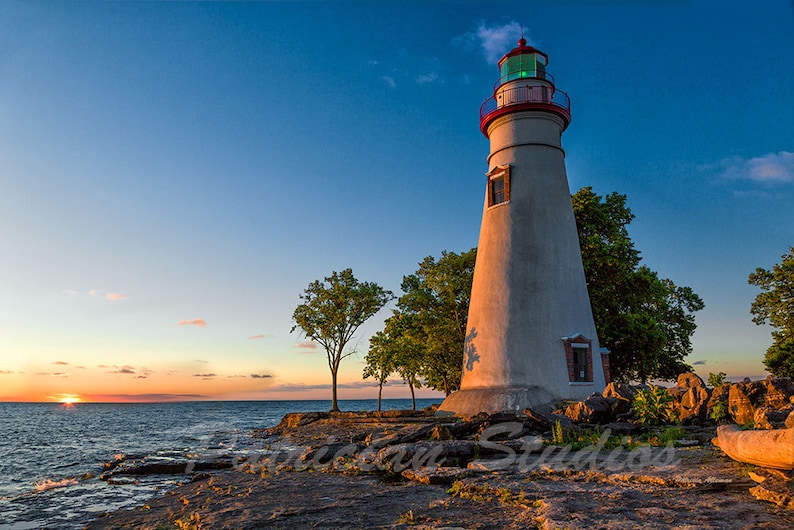 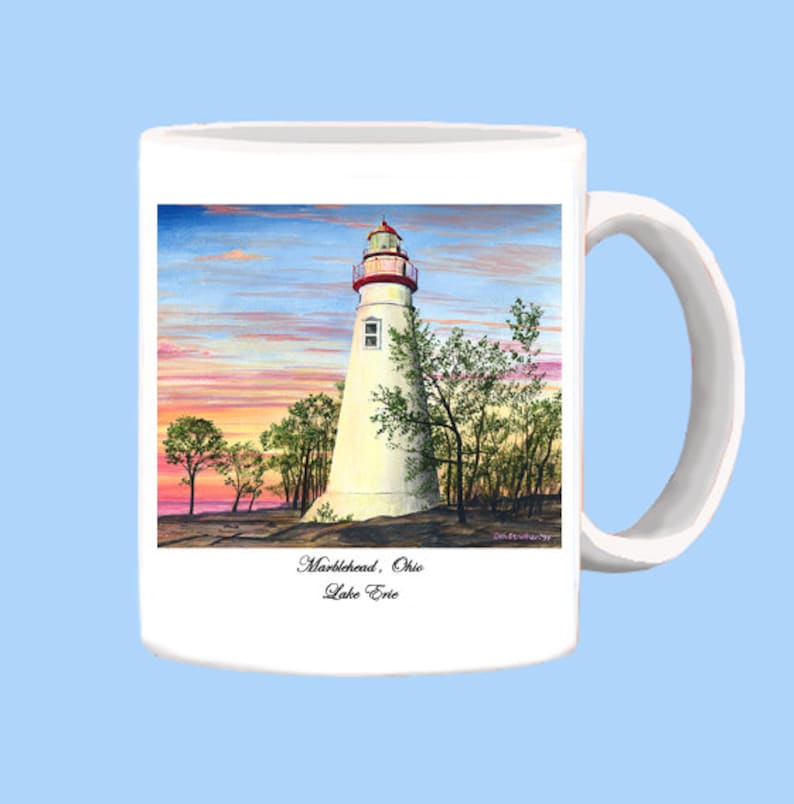 While you are here, be sure to check out the rest of the Great Lakes lighthouses we have visited.

We absolutely love Marblehead Lighthouse on Ohio’s Lake Erie shore and visit any time we are in the area.  If you ever get the chance to visit, be sure to let us know if you enjoyed it.  Until next time… Happy exploring!