There are three beautiful Lake Ontario lighthouses near Niagara Falls on the New York side.  If you have extra time during your trip, they are well worth the drive.  Keep reading to learn more about adding these historic lighthouses in NY state to your trip itinerary.

For our last full day in New York, we had planned to see a couple of lighthouses near Niagara Falls and then head out to Letchworth State Park to see the waterfalls there.  However, due to the amount of rain we had gotten overnight, we figured the hiking trails at Letchworth might be a bit of a mess.  So we decided to stay a little bit closer and visit some of the Lake Ontario Lighthouses in New York, then tour Old Fort Niagara.

So we hit the road, heading north up the Niagara Scenic Parkway until we almost reached Lake Ontario.  Then we headed east on State Route 18, which runs parallel to the Lake Ontario shoreline.

No time to read this now? Pin this New York road trip idea for later!

There are 3 Lake Ontario lighthouses in New York that are each within an hour’s drive of Niagara Falls.  Our plan was to visit all three before returning for a relaxing evening at our campground near Niagara Falls.

There is actually another lighthouse near Niagara Falls as well, but it’s not on Lake Ontario.  If you have time during your trip to Niagara Falls NY, be sure to check out the Buffalo Harbor Lighthouse just a short drive away.  It’s located in Buffalo at the point where the Niagara River enters Lake Erie.

The first of the lighthouses in NY state that we wanted to visit was in the waterfront community of Olcott.  It’s a cute little town that is also the home of the Olcott Carousel Park and several quaint little shops.

While we were looking for a place to park, we were quite bewildered to see a bunch of people walking around dressed as pirates.  It turns out that every summer, the town hosts a pirate festival complete with lots of food, a parade, live entertainment, and a car show.  It looked like everyone was having a great time!  If you are visiting when there isn’t a festival going on, you will probably be able to find parking up right up close to the lighthouse, but we had to walk a bit.

The Olcott NY Lighthouse is free to visit.  It is located 18 miles from the Niagara River.  As far as lighthouses go, the Olcott Light is a fairly small one – standing just 27 foot tall.   It is an unusual square pyramid style lighthouse that is a replica of the one that once protected Olcott harbor.

Originally erected in 1873, the Olcott NY Lighthouse stood watch over the southern shore of Lake Ontario at the mouth of 18 mile creek.  In the 1930’s the light was decommissioned and subsequently moved a short distance away to the local yacht club.  Over the years, the lighthouse fell into disrepair and eventually it was demolished in the 1960’s.

In 2003, construction began to rebuild the lighthouse, using period photos and records as their guide.  Today the Olcott Beach lighthouse serves as a place for visitors to get tourist information, with racks of travel brochures to peruse.

If you collect lighthouse passport stamps, there is a sign inside directing you to one of the nearby shops.  The shopkeeper is super friendly and will be happy to let you stamp your book.

Although you can go inside this lighthouse, you can not go up to the top.  It’s a nice place for photo opps though and a great spot to enjoy the views of the lake.

We were informed by some locals that the beach at Olcott is currently closed because Lake Ontario is currently 3 feet higher than normal.  The beach is completely underwater!

After visiting Olcott, we got made our way back to State Route 18 and headed east.  We had two more Lake Ontario lighthouses in New York that we wanted to see before the day was over!

Most New York State Parks charge an entrance fee, and Golden Hill is no exception.  There is a $6 vehicle entrance fee and then it is $1 per person if you want to tour the lighthouse.  (Prices subject to change – check the Golden Hill State Park website for current fees.)

Built in 1857, the Thirty Mile Point Lighthouse stands 70 feet tall and has an attached lighthouse keeper’s quarters.  Its beacon was visible for eighteen miles.  The lighthouse was decommissioned in 1958 and the land was eventually turned into a state park in 1984.

If you don’t want to go up inside the lighthouse, there is no additional charge to walk around the grounds and take pictures.  However, the lighthouse tour is educational and worth the nominal fee.  So I recommend taking the tour if you get the chance.

There was a tour going on when we got there, so we took the chance to tour the grounds while we waited.  The red silo to the left of the lighthouse was used to store extra fuel for the light. There are also several other buildings near the lighthouse that you can explore.

The Thirty Mile Point Lighthouse tour takes you through the keeper’s living area.  You can actually rent out the lighthouse and stay there for the night on the second floor.  I would love to do that sometime.  Although the woman who gave us the tour did say the lighthouse is haunted.  So maybe that’s not such a good idea 🙂

At the end of the tour, you get to climb the steps to the top of the lighthouse for a spectacular view of Lake Ontario.  It was such a pretty day and there was such a nice breeze blowing, I could have stayed up there on that deck forever!

Here is the view from the top of Thirty Mile Point Lighthouse in NY.  You can see how elevated the water is.  The beach is underwater at this lighthouse as well.  I love how the color of the water changes from a muddy brown to a pretty aqua color the further out you look.  Of all the lighthouses in NY state that I have visited – I think this was my favorite!

This location has 2 lighthouse passport stamps to collect.  You just need to ask the employee giving the tour and they will be happy to get them out of the desk drawer and let you stamp your book.

The light was originally located within Fort Niagara on top of the French Castle.  However, in 1872 the light was relocated to its current location south of the fort.  The light at Fort Niagara was eventually taken over by the US Coast Guard and remained operational until 1993.

Like Golden Hill, you have to pay a vehicle entrance fee to get into Fort Niagara State Park.  When we visited, it was $8 per vehicle.  There is no additional fee to go up in the lighthouse but it has limited hours that it is open.  We lucked out and it was open for tours when we got there.

They only let one group go up at a time, so you might have to wait a bit for the chance to climb the stairs to the top.

You can go all the way to the very top for a great view of Old Fort Niagara, Lake Ontario, and the Niagara River.  However, be advised that it is enclosed entirely at the top and gets quite stuffy.

This location has a lighthouse passport stamp as well.  Just ask the employee who is taking names for the climb to the top.

We found this Lake Ontario Lighthouses map on a sign.  As you can tell, the three lighthouses near Niagara Falls that we visited are just a small fraction of all the lighthouses you can visit along the New York State Seaway Trail.

You could easily spend an entire trip just visiting Lake Ontario lighthouses in New York.  Sign me up for that!

Books on Lighthouses in NY State that you also might enjoy 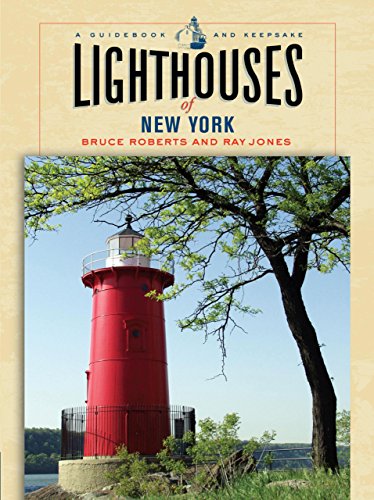 Lighthouses of New York: A Guidebook and Keepsake 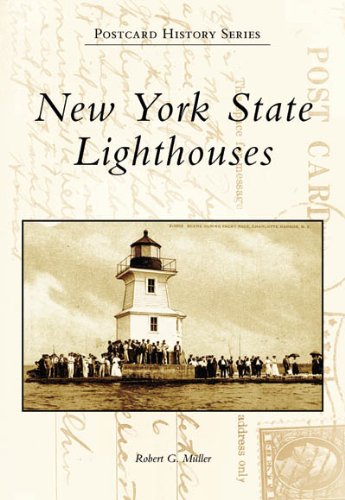 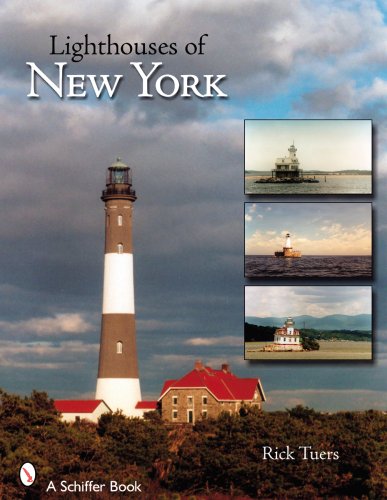 Have you visited any of these Lake Ontario lighthouses near Niagara Falls? Which was your favorite? Happy travels!